After touring the Eastern Cape last April, I was lucky enough to be visiting Port Elizabeth and met up with the owner of Fogarty’s Book Shop.

My books are now available at Fogarty’s Book Shop in Walmer Mall. So if you are looking for middle-grade books for your youngsters for the Christmas Holiday’s, why not pop in and take a look at my Polly’s Piralympics Series. Loads of fun, interactive pages to draw on and get involved with Polly and the crew.

Or for younger readers there are my colouring-in story books the Toucane Series, teaching about not throwing down rubbish, how a friend is a friend no matter their colour and stranger danger. 4-8 years.

YES, 1000 BOOKS! I had to go back and count twice but yes I have sold 1000 books in South Africa. Michelle Richarson, your generous donation to 1st Ed School included my 1000th book and a gift will be coming to you soon.

The Polly’s Piralympics Series seems to have been a hit in both classrooms as well as at home, with parents seeing me at events and commenting:

“Oh, she’s reading your book for the second time,” and “When I asked him what he wanted to read next, he replied ‘Can’t we read Polly again dad.'”

I love it, I love the fact that Polly and her band of Paralympic Pirates are changing children’s lives. If you or your school would like to order please contact me on +27 722 477 101 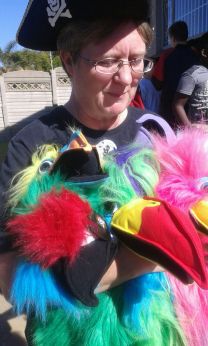 Each book has a reflective/comprehension page at the end of each chapter where the learners can interact with Polly telling her who the class bully is, or drawing their favourite pirate. This is a fun series of books that kids are loving, 1000 purchasers can’t be wrong.

Also for sale in Skoobs Theatre of Books – Monte Casino, Fourways and Exclusive Books in Mall of the South. Ask them for a copy today.

Wow, I can’t believe my book made it to the Algerian Book Fair – Thank You Claire-Rose for packing them last minute into your suitcase. 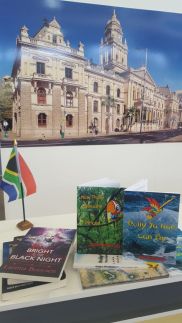 Yes, those are actually my books in the stands! Next time we must get them registered so we can take orders, but at least this time they were there and seen.

Thank you to everyone who has taken the time to not only read my books but also to review them too. I know from a few of you that you read them with your kids and guess the reviews are actually from them.

I am super HAPPY with how my books have been received to date and can’t wait to also get the feedback from the schools who are using it as their setwork books. Well done to Assumption Convent Primary School for being so fast off the mark and going with it this year. I had a brilliant day with your grade 3’s and am super excited to hear how it went in the classroom.

If your school would like Polly and myself to visit and chat to your kids about bullying, being different, anti-drugs or a host of other topics just let me know at janspicssa@gmail.com

And yes, there were more surprises in store for me for Women’s Day here in South Africa. As I opened the local paper the Comaro Chronicle there on the inside page was an article about me.

“You’re famous.” My friend laughed as she read the article. It related to the Jozi Books and Blogs Festival that I had taken part in last week.

Well, I don’t think I’m famous just yet, but I am working on it ha, ha, ha. What a brilliant Women’s Day I have had.

I started writing my first Polly Book five years ago. Then a year ago a friend gave me a strong prod with the end of her toe and told me to, “Go out there and do it.” Thank you, Tonia.

Well whatever IT IS, I’m now doing IT.

I look up into the night sky every evening and make my wish upon my star,  then every morning I tell myself I am going to be the next J.K.Rowling. And you know what, with the support of amazing friends around me I am getting there.

So, what have I done so far? Well, I found myself. When I wrote the first book I wanted to write about Pirates and disabilities,  I linked them together with the Pirates holding their own Paralympic Games – the Pirate Piralympics. Then I realised I actually have a lot more than just good stories to tell, I actually have life lessons to weave into those stories. Life lessons on:

a. How it’s not cool to bully,

b. How it’s OK to be different, (after all who wants to be the same as everyone else when we are so individually special),

c. On climate change and not littering the space around us so we can protect our environment to look after this beautiful and fragile planet that we live on and call home, d. to look at the many cultures and diversity there is around the world and within the country’s we live in and to realise that we are more similar than different

d. To look at the many cultures and diversity there is around the world, and within the country’s we live in and to realise that we are more similar than different. Through this learning tolerance of those who do not share the same skin colour, religion, traditions or beliefs. 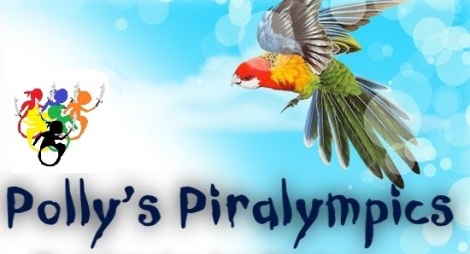 I have tried to do this through my books and to date this is what I have been busy doing:

If my writing ever changes children’s thought’s and attitudes, even just a little bit for the better, then my time on this planet will not have been in vain.

So, when I dream upon my star, I know it can come true. I just have to believe it will.

Thank you to all the wonderful people in my life who believe in me: Tonia, Margaret, Sian, Debs, Arthie, and to those I have not named personally but who are ever at my elbow and or course to my mum, that special lady, who never stopped believing in me, even when I took a breath of self-doubt.

So here are the latest reviews/ratings added to Goodreads, keep them coming folks

AUTHOR: Jann Weeratunga will soon be launching her book.

Jann was born in London in 1963 and has lived and worked in London, the UK, Sri Lanka, UAE and Bahrain. Now living in the South, Jann will be launching ‘Polly’s Piralympics’ at Skoobs bookshop in Monte Casino on January 28 at 11:00.

Previously a primary school teacher and scout or cub leader, 20 years later, Jann feels that her life experiences gave her a very good grounding for what middle grade readers enjoy reading about.

‘Polly’s Piralympics’ is the fifth children’s book she has written and was inspired by the closing ceremony of the 2012 London Paralympic Games. In his closing speech, Sir Phillip Craven told of how a young boy was reading with his mother. In the book he saw a man with an eye patch, a hook for a hand, a parrot on his shoulder and a wooden leg. When asked who it was, he said; “Well he has only one leg, so he must be an Olympian.”

Such was the strength of the London 2012 Paralympics imagery, that it changed peoples’ perceptions of disability forever. The speech made her both laugh and cry and gave her the inspiration for this series of books, which are both unique in concept as well as content.

Other books are: ‘The Magic Vuvuzela’ and ‘Peter’s Wimbledon Dreams’; both self-published through Amazon. ‘Tane’s Rugby Dream’ and ‘Cricket Crazy’ are yet to be published.

Jann has also written over 100 poems, published on the voicesnet.com website under Jan Weeratunga.

At the launch to be held at Monte Casino, there will be pirates battling for gold, a prize for the best dressed pirate (children and parents can come in fancy dress and be judged on their best costume) and there will be a guest speaker reading a few chapters from ‘Polly’s Piralympics’.

“Children are drawn to magic and sorcerers, dragons and heroes, monsters, witches, thieves and all things that go bump in the night – and of course pirates. There are no books written about pirates with prosthetic limbs, sporting blades or racing wheelchairs however – that is until now,” said Jann.

‘Polly’s Piralympics’ is the first book to bring together all of the 18th century nostalgia of the pirate world that we identify with – galleons, swords, walking the plank, treasure etc. – and adds 21st century technology: sonar, Wi-Fi, mobile phones and eco-technology such as solar sails. The pirates obtain prosthetic limbs, blades and racing wheelchairs in a story about how the pirates hold their own Paralympic Games, or as I prefer to call them the Piralympic Games.

‘Polly’s Piralympics’ describes the humorous situations that the pirates find themselves in during the course of the week-long Piralympics.

‘Polly’s Piralympics’ demonstrates how enemies can become friends through commonality – their disabilities/challenges and love of sport (and food).

“It makes young people aware of how disability is not just physical and how we all in fact have a disability of some sort or other: e.g. one arm, no legs, one eye, can’t sing, can’t dance, can’t count, can’t spell or can’t cook and that no-one is perfect. It demonstrates that some disabilities are more obvious than others and shows how much we can do, rather than what we can’t do. We all learn to compensate for our weaknesses and turn them into strength. It includes cheating; comradeship; laughter and tears and why we should not be a bully,” said the author.